Continued from part I, part II and part III.

Once I finished populating the main eyelet board and mounting/wiring the tube sockets, I got to work on the power filter board.  This is the part of the amp that filters out the ripples in the DC power and can kill you if you are not careful.  These capacitors are about the size of my thumb, and they can hold enough of a charge to stop your heart, even after years of disuse.  Of course, since these were new capacitors and had never been charged, they were harmless.  Below is the fully assembled filter board, with color coded wires running through the grommets to the other side of the chassis. 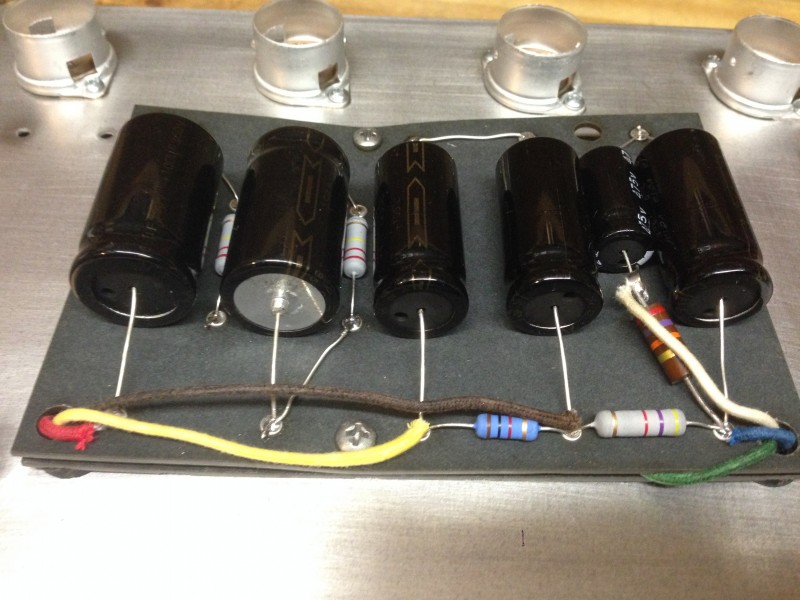 Once the rest of the amp was assembled, these would be covered by a pan, to prevent users from accidentally brushing up against the fatal wires.

Next I installed the new Mojotone power transformer and the filter choke.  I went to install the new output transformer and quickly realized that the footprint is slightly smaller than the old transformer, so the holes that were there wouldn’t do the trick.  I went to the local Do It Best and bought a carbide drill bit and some lubricant, marked where the two new holes would go and DRILL, BABY, DRILL.  Got that new transformer installed.  Now our Bassman is looking like this: 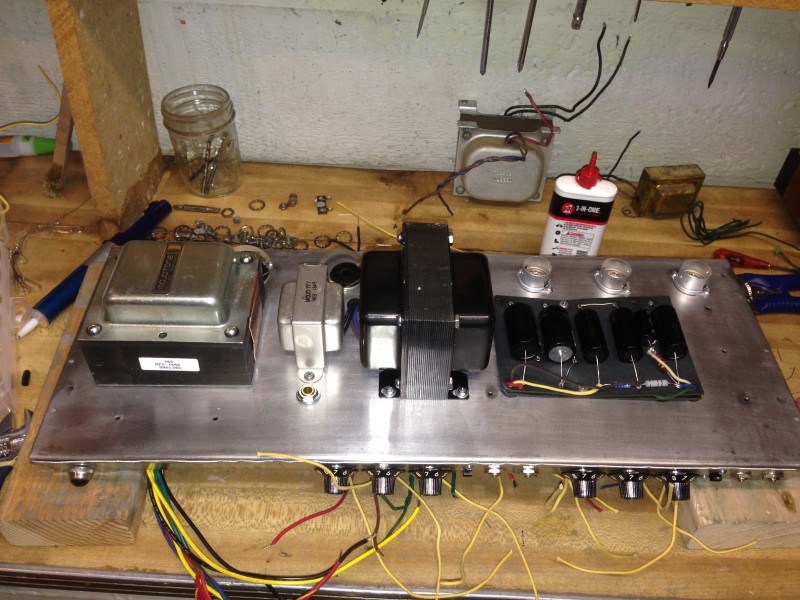 And with the wires from the transformers and filter board all pulled through to the inside of the chassis, it looked like this: 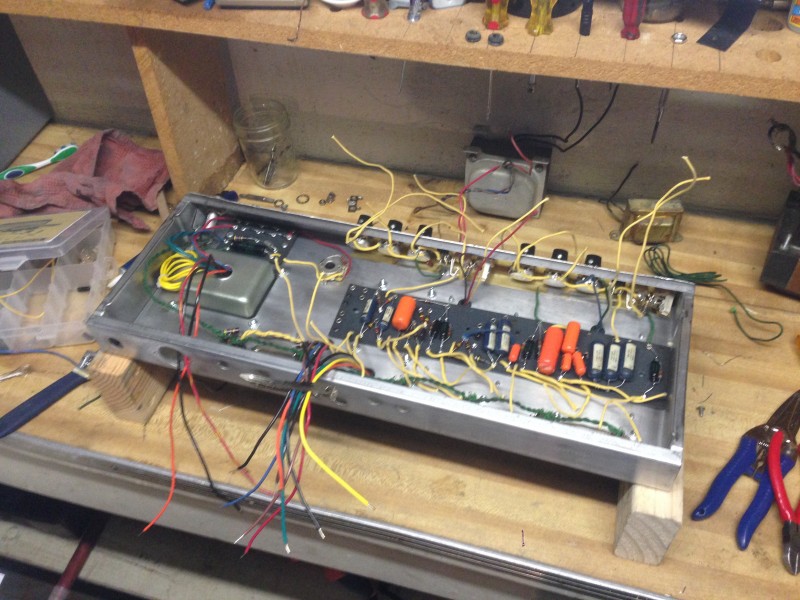 One thing I noticed about the new output transformer is that the secondary coil has an 8 ohm output, with 4 ohm and 2 ohm taps.  I knew immediately that I wouldn’t want to use the 2 ohm tap, so I heat-shrink wrapped the end and coiled it up.  The 8 ohm wire was intriguing, so I decided to take advantage of the two output jacks and make one the 8 ohm and the other the 4 ohm, instead of having them be parallel 4 ohm outputs like the original.

By this time, I had the control panel assembled, all three of my eyelet boards populated, the tube sockets wired, and all of the transformers in place.  I double checked all of the boards to make sure that nothing else needed to be attached, as that would have become difficult once they were wired into place.  Once my check was complete I proceeded to install the back panel and connect all of the wires from the pots to the boards, the board to the tube sockets, etc.

Here is the completely re-assembled Fender Bassman, to circa 1964 specifications with very minor modifications.  Now all I had to do was fire it up to see if it worked, but I got cold feet.  What if something is shorted?  What if something is out of place?  What if I ruined it before I could even have a chance to crank it up?  These were all questions I asked Scooter, who I had been checking in with periodically to make sure I wasn’t screwing anything up royally.  He suggested that I use a current limiter when I turn it on, so that I don’t cook anything in the amp should there be a short somewhere inside.  Luckily, I had a very simple schematic for one in my copy of Tino Zottola’s Vacuum Tube Guitar & Bass Amplifier Servicing.  So I got to building one…