Continued from part I and part II.

The parts arrived while I was on tour.  As soon as I got home I opened up the box and took stock of my purchase.  I had ordered the kit minus the cabinet, which turned out to be a big mistake, because I ended up having to order one separately anyway, and I could have saved on shipping had I ordered it at the same time as the rest of the kit.  The box from Mojotone contained everything as promised: the passive components along with all of the sockets, jacks, pots and bolts/fasteners sorted and stored in marked hobby cases, coils of wire with color coded push-back cloth covering, brand new eyelet boards, a brand new (and now redundant) chassis, Blackface-style face- and backplates, and the transformers packed in separate boxes.  The next morning I got down to the real work. 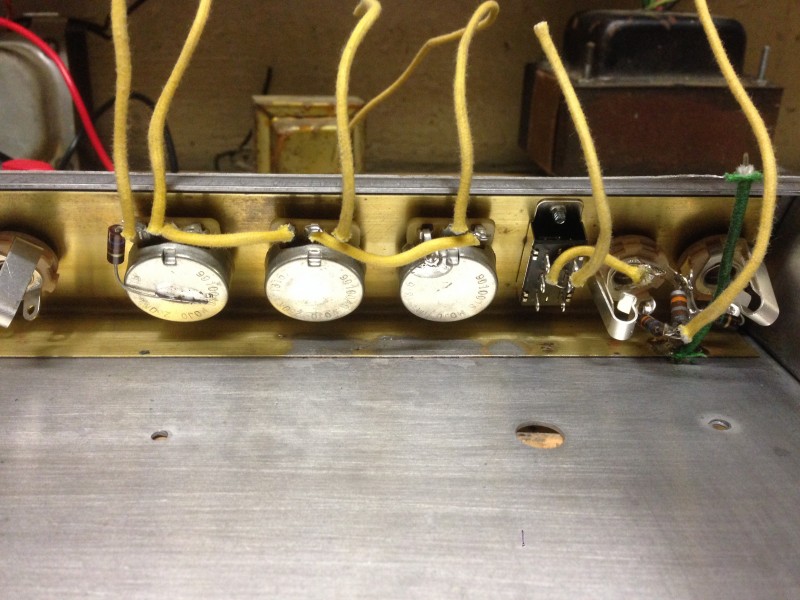 This being my first amp project, I wanted to be careful not to miss any steps.  I decided that completing the build in systematic way would minimize the chance of missing anything.  I decided to start by mounting the front panel and wiring the pots, switches and jacks to one another first.  The jacks proved to be a little bit tricky, as some resistor leads have to be wound from one lug to another, and through to the lug of the second jack.  Also, I had to make sure that I was not soldering any lugs without first making sure that all of the required wires were attached there.  After attaching each wire to the pot, I eyeballed the wirelength and cut to the appropriate length. 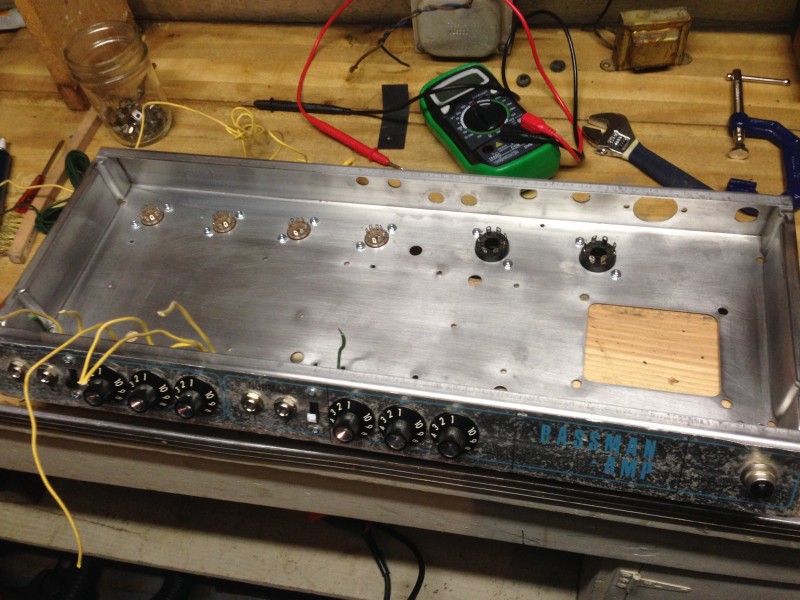 Here is a front view with the front faceplate assembled.  I tested the original lamp holder, and installed it into place.  I did what I could to clean up the original faceplate, but due to the fragility of the decals I decided to just go ahead and install it without too much cleaning.  Getting it to sparkle like new was just not going to happen, given the depth of the wear.  Also pictured above, are the new sockets for the preamp and driver tubes.  The new power tube sockets didn’t fit into the holes in the original chassis, so I went with the original tube sockets.

Above is the partially populated eyelet board.  At this point I had completed populating the bass instrument circuit, as well as the plate load resistors and capacitors for preamp tubes 1 and 2.  Despite my eagerness to get the amp built, I realized quickly that populating the board (and later, running the wires) would be difficult if I soldered the wires from the control assembly to the board, so I refrained from soldering any of the connections on the “front” side of the board.  All of the connections on the tube side were made, once again measuring the length of the wire runs to make sure that they would make it to each wire’s appropriate destination.  The large, orange capacitors are the Sprague Orange Drops that came with the kit.  The blue sausages should look familiar from my earlier post, as they are the ones that I salvaged from the original board.  Many of the carbon comp resistors were also salvaged from the original amp.

After doing a little more work on populating the main board, I got restless and decided to start working on some of the other parts of the wiring.  I started by populating the rectifier/bias board (pictured below, top left).  I was missing one diode in my kit, so I made do with one from the original.  I then wired the filaments on all of the tubes (green, twisted wires at the bottom), making sure that the heaters on the power tubes were wired in phase with one another.  My understanding is that this is crucial for noise-free operation in push-pull type amplifiers because when they are wired in phase with one another, the oscillation of the AC power to the heaters is cancelled out.  I also went ahead and connected the wires and resistors to the power tube sockets. 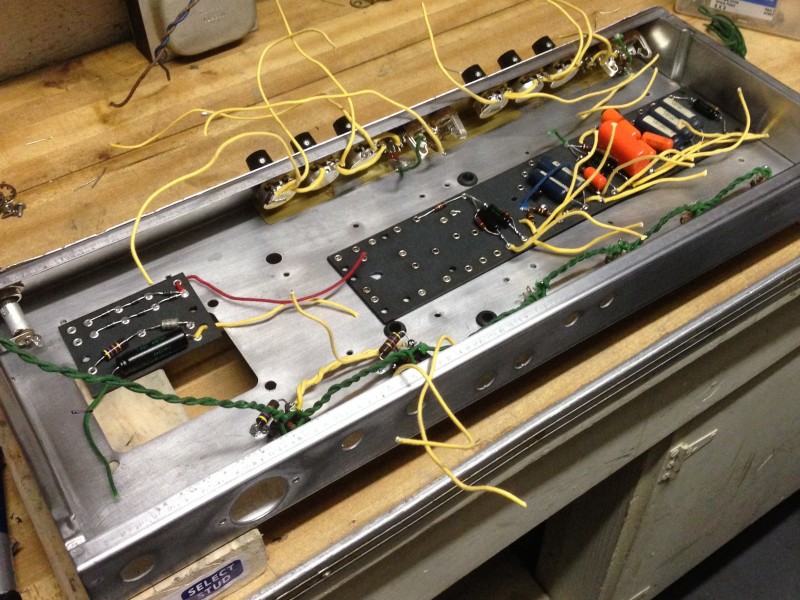