As some of you may know, I dabble in electronics.  I got into it several years ago when I happened to be browsing the Internet under the influence of some delicious (and apparently potent) local IPA, and before I knew it I had ordered a DIY guitar pedal kit from Build Your Own Clone.  I eventually sobered up and built the pedal, and I found–much to my surprise and delight–that it sounded great!  I later got into circuit bending children’s toys from Goodwill, building more basic (and also esoteric) guitar pedals, and microphones out of old rotary phones.

Fast forward a few years.  A couple months ago my friend, James of Sound Logic, gave me a non-working Silverface Fender Bassman amplifier.  The tolex on the cabinet was dirty, loose and curling.  The cabinet itself felt spongy in places, where the pine was rotted straight through. 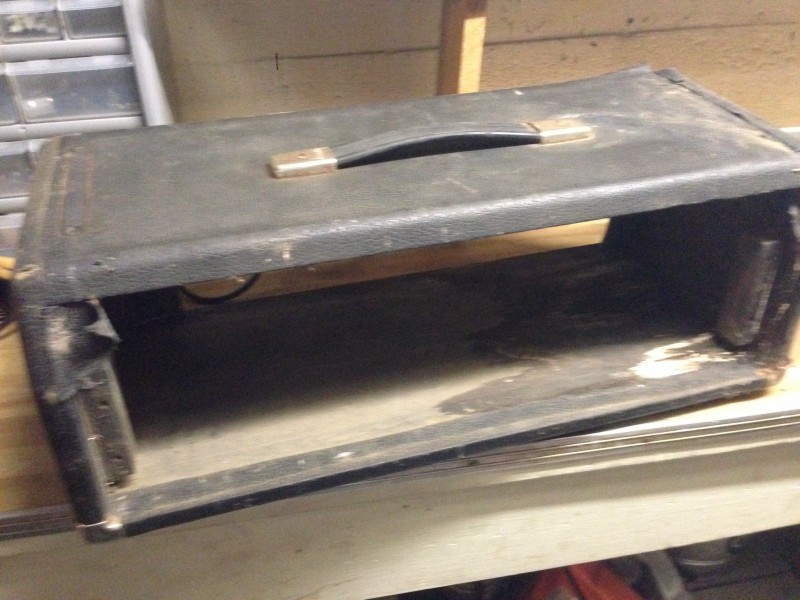 The chassis had a layer of patina and dust from years of neglect.  Looking inside, the eyelet boards were warped from what I assume is water damage (the same water that caused the cabinet to rot). 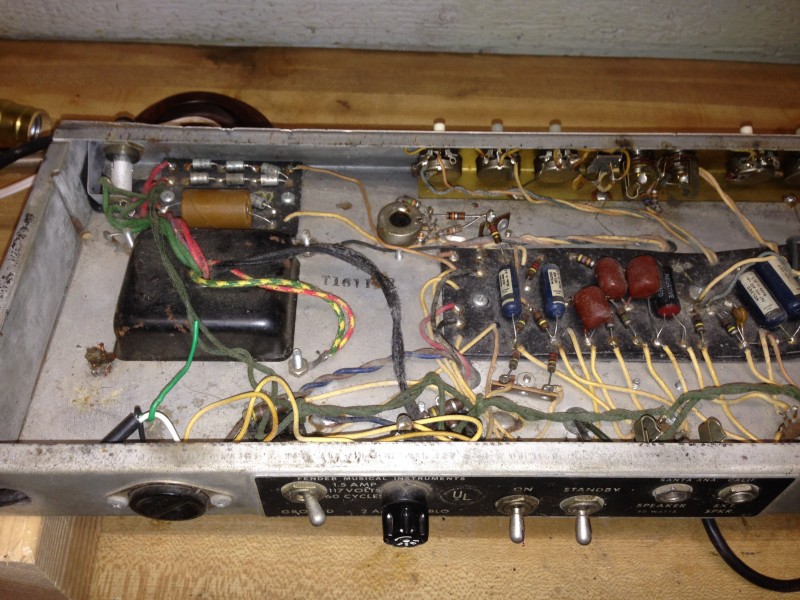 I had never worked on an amplifier before, but I had built and modified many guitar pedals, and I had the interest and the desire to get into this next phase of my hobby (read: habit).  I immediately set out to do some research and see if this particular project was even possible for somebody of my ability. 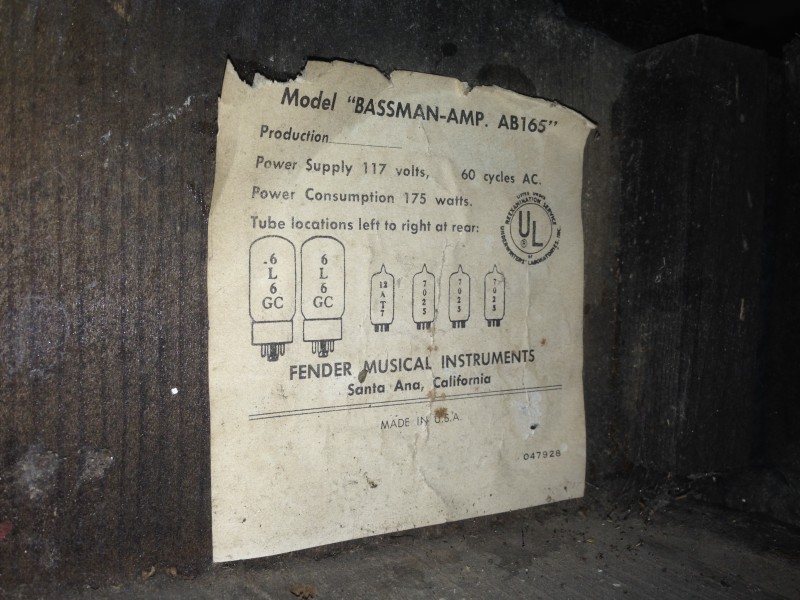 A cursory Internet search told me that the AB165 (the designation for this particular iteration of the Bassman circuit) was made between the years of 1964 and 1977.  The silver control panel (hence, “Silverface”) denotes that it was built after May of 1967 when they transitioned from the “Blackface” cosmetics.  This narrowed down my date to be post-’67.  Another indicator of the date of manufacture is what Fender aficionados call the “drip-edge”; a thin aluminum trim that surrounds the silver and blue grille cloth on the front of the amp.  This was a cosmetic feature that was used only on Silverfaces during 1968.  Also, some guy on the Internet wrote that the cloth-insulated wires that I was seeing in the amp were only used until “some time in 1968″.  Turning over the chassis, I was able to get a look at the manufacturer’s codes on the power transformer, output transformer, and filter choke. 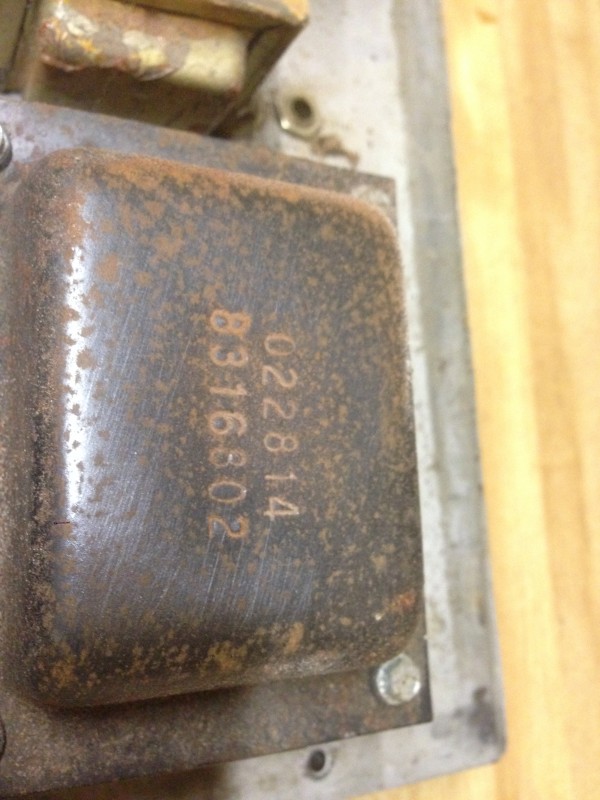 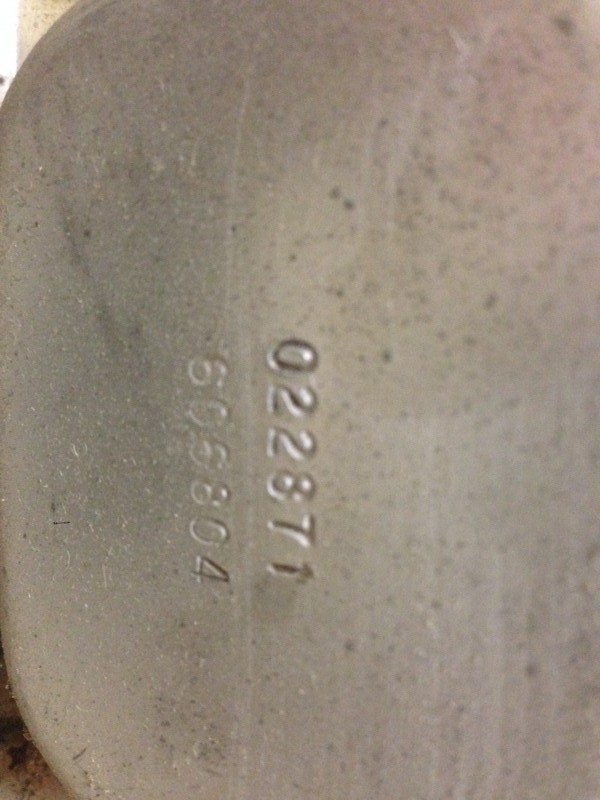 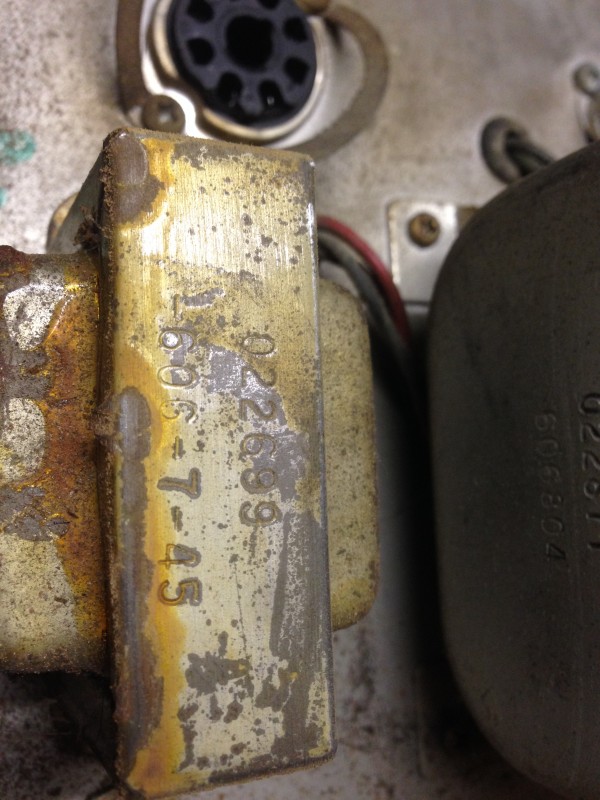 On the left is the power transformer, with a code ending in “6802″.  This denotes that it was made in the 2nd week of 1968.  The output transformer code (center) shows that it was made in the 4th week of 1968, and the choke (right) was made in the 45th week of 1967 (look at the last three digits separated by a hyphen).  So, the transformers were made between November of ’67 and late January of ’68, so depending on how long they sat around in storage after their manufacture, the amp could have been assembled any time between January of 1968 and 1969.  I suppose if I cared to know EVEN MORE about when these amps were made I could consult the date codes on the pots, or maybe carbon-dating could be applied…

My original idea was to gut the amp and restore it to original 1968 specifications.  After searching the Internet I saw that there were parts kits available for reconstructing the AA165, a slightly older, rarer, and therefore more sought-after circuit than its more ubiquitous successor.  Also, I found that a fellow member of BYOC forum in which I spend much time lurking (his name is Scooter, he is the owner and tech at Granville Guitars in St. Petersburg, FL) had basically completed the EXACT same project that I was to undertake.  After reading through Scooter’s build log, sending him a few messages, and finally speaking to him on the phone, I decided to pull the trigger on Mojotone‘s Blackface Bassman kit by his recommendation.  This particular route was a slightly different path than he took, but nonetheless is proving to be a great learning experience.  I chose to order the complete Bassman kit, which includes all of the small parts, all three transformers, as well as a brand new chassis and new faceplates.

Quick plug for Mojotone: these kits are great.  All of the parts come pre-sorted and labeled in compartmentalized hobby cases, with GIANT color wiring diagrams and schematics.  Look them up if you are looking for an amp kit!

At that point, I had some work to do while I waited for the kit to arrive in the mail…